This week we managed what we just narrowly missed last year: winning the IYNT trophy!

Preparation for this year’s IYNT started somewhat early, but definitely kicked off fully after the SYNT in March. In the last months, Ester, Lilly, Lohitsai, Lucas, Michael and Samuel worked hard. Investigating the process of making quark, playing tunes on bottles, investigating properties of granular materials and many other interesting problems.

On July 3rd it was finally time to fly to Tbilisi, Georgia, to test, how well prepared we were. This year we were going to meet 15 teams from 9 countries.

In the critical first round, we met a Georgian and a Russian team. We won this first round with a presentation by Esther on the properties of the linking of Wikipedia articles, an Opposition by Michael on the collision time of super balls and a Review by Lilli on the genetics of eye colors. With the 45.7 points, we managed to place second, right behind New Zealand, the team that narrowly beat us last year and presumably our biggest contender. 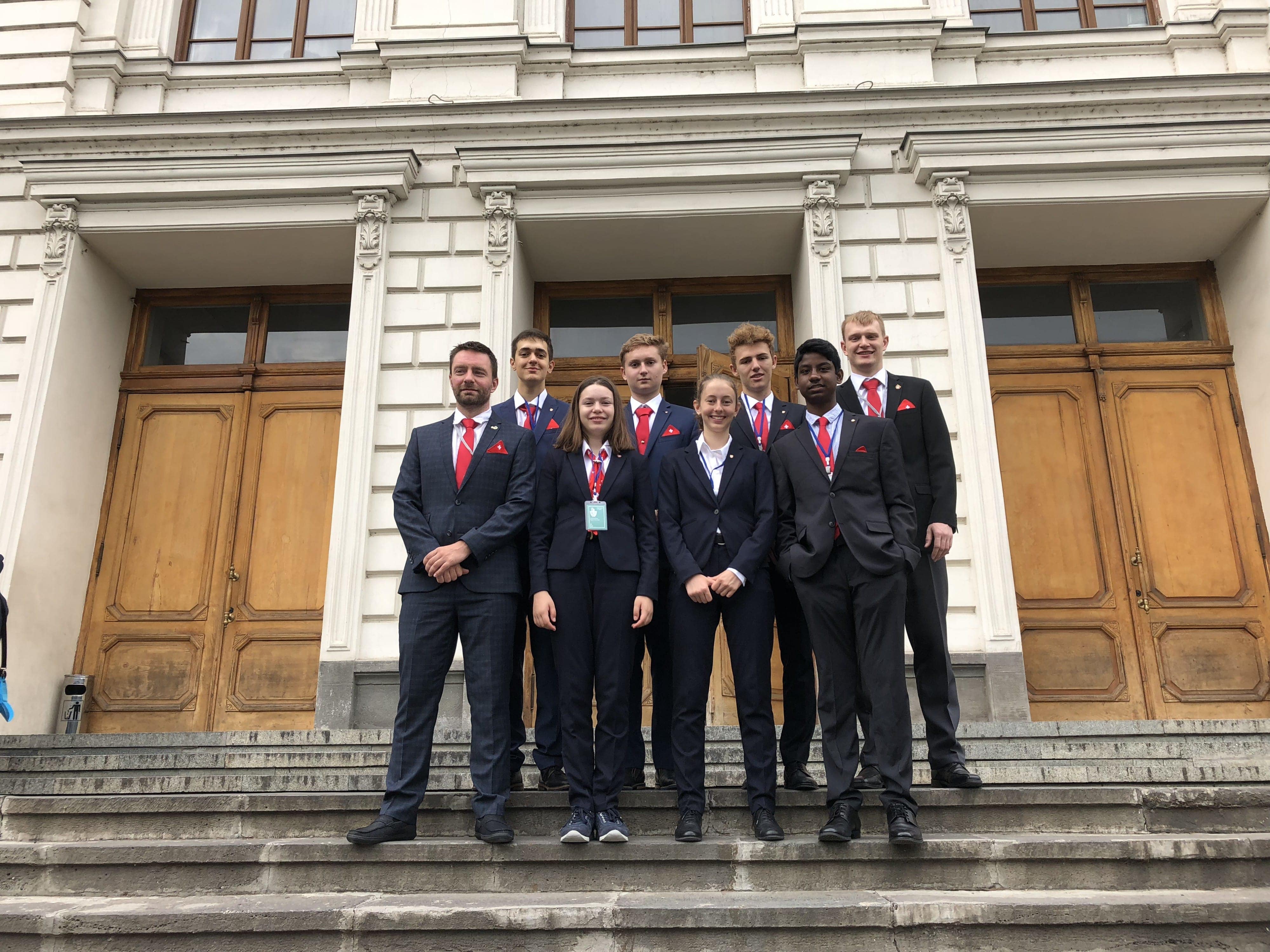 In the second round, we met two strong teams from Croatia and Belarus. The round was very close, and even though we did not technically win the round, we were very close behind and got the very important 1.0 for the criteria of victory. With the 39.0 points, we managed to keep our second place.

The third round was designated to the Invent Yourself problems. Those problems are very open and require the teams to come up with their own, personal interpretation. In this round, we met New Zealand directly together with a Russian team. We managed to beat New Zealand clearly with Lucas’ report on improving the techniques for the Long Jump using time resolved photography. With 44.6 points, we beat New Zealand clearly by almost 10 points. This was enough to clearly take the lead in the ranking.

In round 4 in the afternoon each team had to prepare a completely new report with only 45 minutes of preparation time. Lohitsai presented our teams findings on the damping of pendulums and even though it was not our team’s strongest round (38.1 points), we managed to beat another Russian team and the team Iran 1. We also kept our lead in the overall ranking.

On the next day, the 9 strongest teams fought in three semifinals for the three spots in the final. We met Croatia and Belarus, the same teams as in round 2. This time we managed to win the round with a stunning 47.8 points with Michael’s presentation on the randomness of coin flips and strong opposition and review by Lucas and Esther. In the other semifinals, Bulgaria-Sofia managed to beat New Zealand and Iran 2, and one of the Georgian teams beat one of the Russian teams and the other Georgian team narrowly to qualify for the final. The day was rounded off with some sport activities.

The next day, some of us took a nice excursion, visiting a monastery and an ancient city built into the side of a mountain. The rest was preparing for the big final. We were doing our best to be prepared against both Bulgaria’s presentation on “Collision” and Georgia’s “Buffons Needle”.

By winning the captain’s contest, Michael set us up to present last. We started with a great review by Esther (8.7, the best of the tournament, tied with her review of the semifinal) and continued with Lucas’ Opposition (15.1, also one of the highest grades). We finished it off with Michael’s report on why bottles make a sound when you blow over them and how the sound changes when you fill water into them. The jury seemed to like it very much and gave it 23.5 points, highest in the final and third of the whole tournament. With a total of 47.3 points we won the final by almost 4 points and we were declared absolute winner of the IYNT 2018.

Bringing home the trophy means a great deal to all of us and we are proud of the whole team that made this possible and we will give our best to replicate this result in the following years.